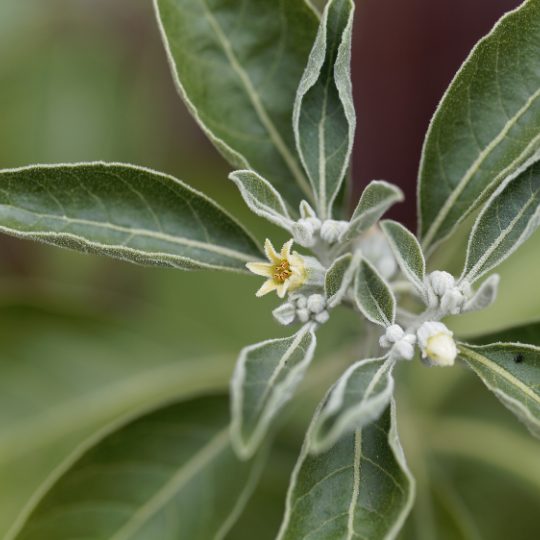 Usage: Here in the Western world, ashwagandha root has recently gained quite a bit of popularity as an adaptogen. However, this plant has been revered for its many medicinal properties for over 3000 years. The root as well as the aerial parts of the ashwagandha plant have a history of use in the Ayurvedic tradition of India.  In sanskrit, the word ashwagandha means “smell of the horse,” referring to the horse-like smell of the root. Somnifera, in Latin, means “sleep – inducer”.

Ashwagandha root is both an adaptogen and a nervine, helping our bodies respond to stress and easing us into a state of rejuvenating relaxation. The beneficial effects of ashwagandha root on the nervous system can help ease anxiety, depression, insomnia, nervous exhaustion and brain fog. Because of its positive effects on adapting to  stress, W. somnifera is utilized as an aphrodisiac and sexual tonic, as well as an immunomodulator. The root of this plant is also reported to have anti-inflammatory effects, especially on inflammation associated with rheumatism. Ashwagandha root is slightly warming and can be bitter. It is often dried and tinctured, powdered or boiled with milk. Both the root and leaves can be poulticed and applied topically to relieve rheumatic joint pain. The berries can be used in place of rennet to coagulate milk in the cheese making process.

*WARNING/CONTRAINDICATION: Some sources indicate using caution during pregnancy. Avoid if sensitive to other Solanaceae (nightshade) plants.

Growth/Habitat:  Withania somnifera is indigenous to the dry regions of India. It is a widely cultivated crop in its native zones. Ashwagandha is a perennial shrub, growing to about 2 to 3 feet in height. The leaves are simple and entire and  are arranged both alternately on a slightly fuzzy, woody stem. Ashwagandha flowers throughout the year and produces small, green, bell-shaped flowers that then give way to bright red fruit in a papery husk.

Ashwagandha is fairly easy to grow in Central Florida and propagates readily from seed. Seeds are light dependent and should be sown in the spring. This plant prefers warm, arid climates but will do well in our Florida humidity in well drained soil with full to partial sun. The root of  ashwagandha is long and tuberous and should be harvested in the fall after a minimum of 200 days of growth to 3 years.

Use 1 ounce dried ashwagandha root to 1 quart of coconut milk, cover and bring to a simmer for 10 to 20 minutes then turn off heat. Add vanilla and honey to taste.  Drink 4 to 8oz up to 3x/daily.