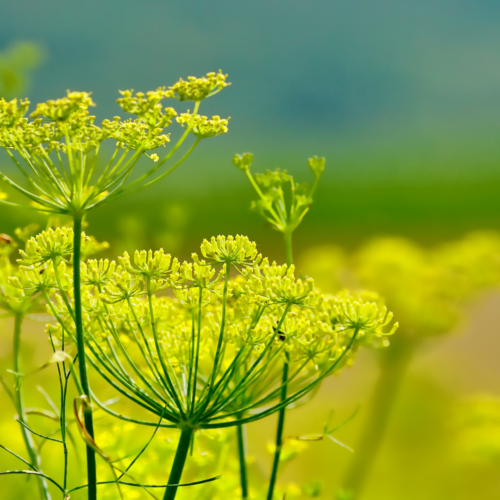 Usage:  The entire above-ground portion of the fennel plant can be utilized for food and medicine and have been for centuries. Valued by the Greeks & Romans, fennel tea was said to have been consumed before battle to give warriors courage. According to Greek myth, Prometheus carried fire from Olympus to Earth with a giant fennel stalk.

The bulbs and leaves have a mild, anise like flavor that lend to delicious culinary dishes. The seeds of fennel are considered to be the more potent medicinal portion of plant due to their high aromatic oil content. The information contained here will generally be referring to the usage of the seed unless stated otherwise.

Aromatic fennel seeds are an effective carminative, helping expel gas and ease digestive upset. Fennel seeds are warming and drying, stimulating sluggish digestion and helping to relieve indigestion and diarrhea. Fennel is an excellent remedy for colic in babies, especially when combined with catnip or chamomile. (This blend is excellent for adults too!)

The antispasmodic properties are not limited to the digestive tract but also have a positive effect on the respiratory system. Fennel is an excellent component to a formula to treat cough and bronchitis.
Fennel seed is known as a galactagogue – which means that it can help breast milk production in individuals with a low milk flow. Safe for nursing folks and babies, fennel seed should be used in small amounts and with caution during pregnancy.

A delicious addition to an otherwise unflavorful herbal formula, fennel shines as a tea and culinary spice. This sweet anise like seed can also be prepared as a tincture in your prefered menstruum, just be sure to lightly crush the seeds first.

Growth/Habitat: Native to the Mediterranean, fennel now grows in many regions of the world. Fennel grows well in Florida, the bulb being a cool weather garden vegetable and the flowers and seed beginning in May and throughout the summer. There are two varieties of fennel, common fennel and sweet fennel, or Florence fennel. Florence fennel (Foeniculum vulgare var. azoricum) is cultivated for the hearty bulbs, where as common fennel (simply F. vulgare) is grown for the leaves, pollen and seeds.

Along with dill, fennel is in the carrot family (Apiaceae). Fennel leaves resemble dill leaves in that they are feathery and divided. Fennel has hollow stems and grows to be about three feet in height. The small yellow flowers are arranged in a umbrella like shape called an umbel and make way to the seeds we use for medicine. To harvest seed, cut the seed head once they have begun to turn brown and place in a paper bag and allow to fully dry; label & store. Plant fennel seeds in Florida in the cool months between October and March.

A great addition to the butterfly garden, pollinators love fennel flowers and the plant acts as a host for the caterpillars of black swallowtail butterflies.