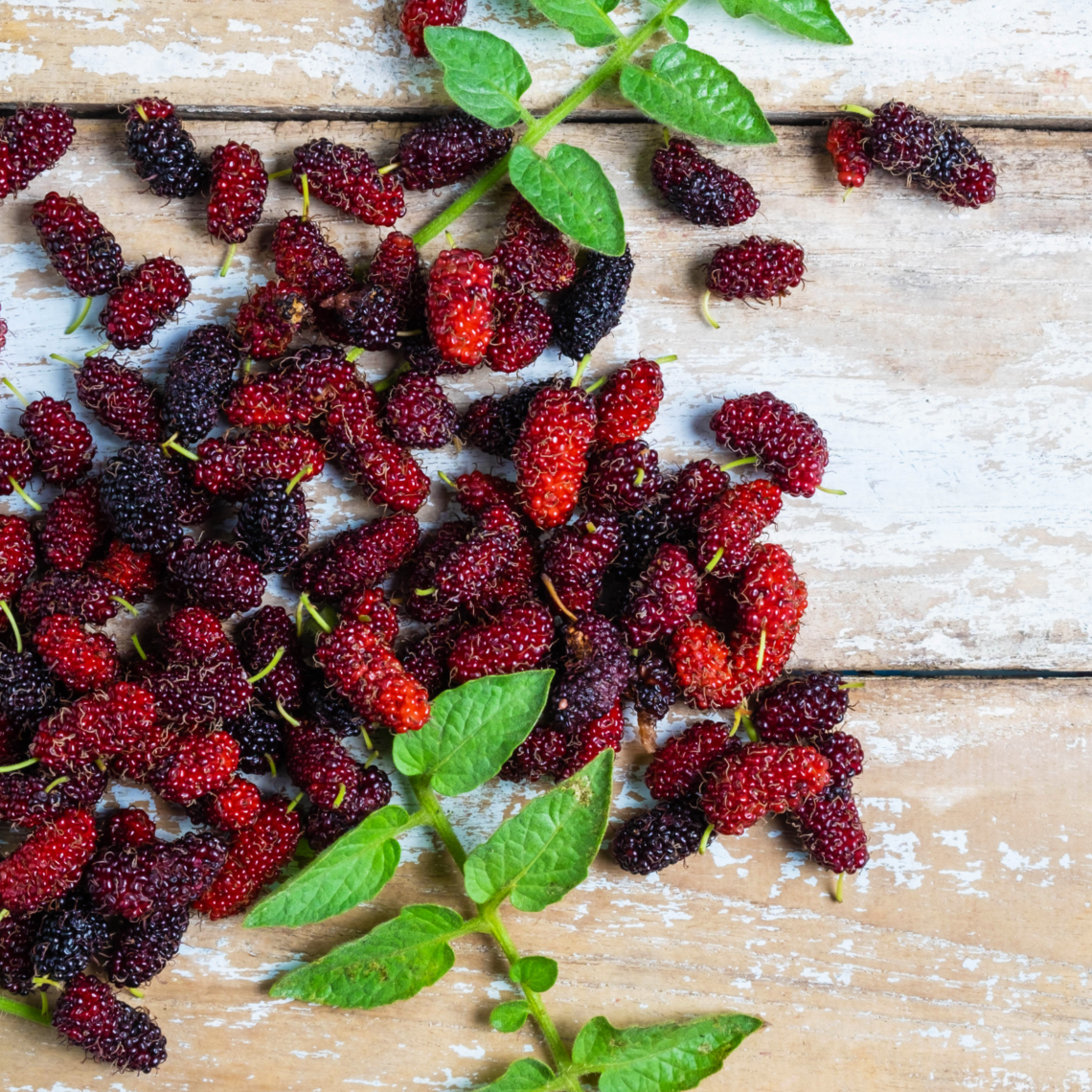 Latin Name
Morus Alba (white mulberry) and Morus Nigra (black mulberry)
There are upwards of 50 genera and about 900 species.

Habitat & Growth
Native to China and is grown all around the world.  It is a perineal bush or tree herb with heart-shaped leaves that can be found in urban areas as an ornamental and can be found across the world wherever there are silkworms.

Mulberry grows easily in warm loamy and well-drained moist soil and in the sunshine. It can be propagated by seed or cutting.

The leaves are harvested in late autumn, the twigs in early summer, and the ripe berries in the summer. In the winter the root is dug. All pruning should be done in the winter and should only involve the removal of deadwood and sometimes removing oddly placed branches.

History/Tradition
White mulberry leaves are the preferred food of the silkworm and have been cultivated for over 5000 years for that purpose.

The male and female flowers are usually found on separate trees which might mean the need for both in order to berry.

The black mulberry is long-lived and can reach up to 50 feet. As it grows the gnarled trunk often leans and must be supported.

It was introduced to the United States during colonial times when the settlers were hoping to establish a silk worm industry. There are two species native to North America: Morus rubra, commonly known as Red Mulberry and M. microphylla, known as Texas Mulberry.

A fiber was obtained from the bark and used in weaving. A brown dye can be obtained from the trunk.The wood is valued for sporting goods due to its durability, flexibility, and elasticity. It is used mainly for tennis and badminton rackets, hockey sticks, furniture, agricultural implements, and house and boat building materials. The stem is fibrous and is used in Europe and China for making paper

The Romans loved eating mulberry fruit at feasts and likely brought it to England. It was on Charlemagne’s list of useful and medicinal plants (812 AD) to be cultivated on the imperial farm.

In Ovid’s Metamorphoses (and mirrored in Shakespeare’s A Midsummer Nights Dream) The origin of the dark red color of the berry is explained. Pyramus and Thisbe were to marry secretly under a Mulberry tree but when Pyramus got there she saw a lion and ran off. When she ran she dropped her scarf and it was tattered by the lion. When Thisbe arrived he presumed she was killed by the lion and was so distraught that he stabbed himself. His blood stained the berries their dark ruby red.

Associated with the Tao and other sacred traditions this tree is often planted in sacred gardens or as a symbol of cosmic order and replenishment.

In some Chinese traditions the World Tree is identified as K’ong Sang, the hollow mulberry tree.  It is considered a hermaphrodite because the tree dates back prior to the separation of Yin and Yang (male and female) and represents the Tao.

1/3 of a cup of dried mulberry fruit contains: 4 grams of protein and 20% of your daily fiber.

Benefits
White mulberry fruit is used for the management of cholesterol and regulation of blood sugar.

Morus Nigra has been used as a laxative and antiseptic. The choline found in Mulberry fruit helps to stimulate better memory function.

As an antibacterial, Mulberry leaf has shown to inhibit and destroy a variety of bacteria.

Mulberry leaf is used for treating general cold symptoms as well and is quite useful for dry, hot, painful coughs. The leaf lubricates the lungs, which assists in stimulating and expectorating mucus that is stuck.The leaves can be made into an eye wash and has also been found to possess anti-venom actions.

Mulberry has been successfully used to treat cases of elephantiasis.

The twigs of Mulberry have traditionally been used to treat joint pain, arthritis, and edema due to its promotion of circulation.

The root bark is used mainly for the lungs, clearing heat, calming wheezing and stopping a cough. It is also used as a diuretic, stimulating urine and reducing edema in the body.

In China each of the plants parts have unique therapeutic uses. The berries are bottled as a beverage to enhance immunity and promote good health. The bark is honey-fried to enhance the stop coughing and wheezing functions

Cautions
Black mulberry may lower blood sugar in diabetics; take with the supervision of a health care professional.

Culinary use
The fruits may be eaten dried, cooked, or raw and are made into jellies, jams, chutney, pies and is added to bread, cookies, or puddings. The fruit is also an ingredient in mulberry wine and is sometimes used as a raisin substitute. The inner bark can be roasted and ground into a meal and then used as a thickener in soups or mixed with cereals when making bread. The young shoots have been used as a tea substitute. The juice of the Mulberry makes a refreshing and cooling drink that can be soothing to a child during a low fever.

In regions of Turkey they make Pezmek, a mulberry fruit (sometimes grape) molassas which herbalist Susun Weed speaks of in her teachings about cancer prevention and support.

Other uses
A fiber was obtained from the bark and used in weaving. A brown dye can be obtained from the trunk. The wood is valued for sporting goods due to its durability, flexibility, and elasticity. It is used mainly for tennis and badminton rackets, hockey sticks, furniture, agricultural implements, and house and boat building materials. The stem is fibrous and is used in Europe, Japan and China for making paper

Magic : Protection from lightning. Wands made out of mulberry wood are used as a protectant against evil.Make a tea from the leaves and use the brew to draw protection sigils. The spirit of Mulberry encourages us to set aside our fears of scarcity and rejoice in gratitude and abundance.

Sleep with Mulberry leaves under your pillows for psychic dreams. Carry the leaves as a talisman for strength and courage. Meditate under the tree to sync your subtle bodies.Use wood from this tree to craft a wand that will boost your willpower.

Use this plant to promote Yin and Yang Balance as it is considered to have both male and female energy.