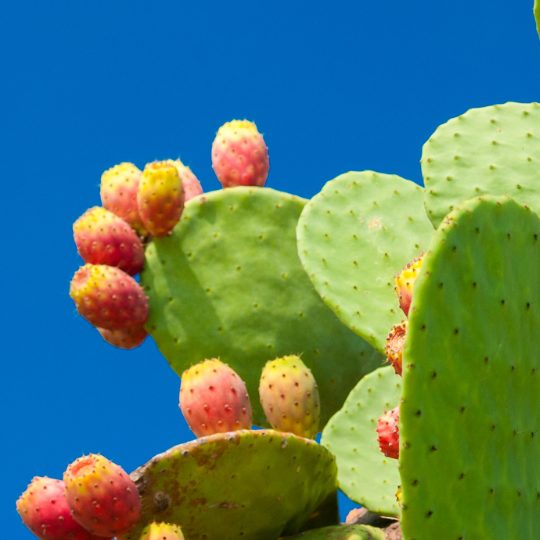 Common name: Prickly pear, nopales,tuna, Indian fig, many different names by many cultures of people across the regions in which it grows

Usage: The usage of the many Opuntia species is great and varied, from food and medicine to dye and water purification. This genus of cactus has historical and modern usage beyond that of nopal tacos (which is one superb way to utilize this spiky plant’s tender pads). Two species of Opuntia have particularly extensive histories of usage and modern science & research is delving in to further support this. O. cochenillifera is a host to the insect Dactylopius coccus, or the cochineal bug. The female cochineal bug contains a red substance that, before the dawn of chemical dyes, was the main source of red-colored dye, known as carmine. In fact, this cactus and insect were historically of utmost importance in Mexican culture as well as trade. Historically carmine dye once ranked second behind silver as Mexico’s main export. While synthetic dyes have risen in popularity and remain the main source for most of the world’s red coloring, the tradition of utilizing the cochineal insect for coloring textiles is actively practiced in many Central and South American communities. Public concern about the safety of synthetic chemical dyes has created a recent resurgence of the carmine dye industry. O. ficus-indica is the species most commonly cultivated as food and is most likely what you will find as nopales on the shelf at the grocery store. As a food, both the young pads, botanically known as cladodes, and the mature fruit are consumed. There is a myriad of recipes from many different cultures around the world that utilize this cactus as food and beverage, as well as medicine. The mature fruits of the prickly pear make a delicious drink, syrup, jam, and liquor. In Florida, the fruits can be found from late fall into late winter. The tender pads can be cleaned of spikes and glochids and consumed in a variety of different ways. (See recipe and links) The pads are a significant source of calcium, vitamin C and magnesium as well as other minerals.  Medicinally Opuntia has been reported through both historical use and scientific research to: act as a diuretic, an analgesic, antiviral, anti-fungal, antioxidant, anti-inflammatory, mucilage, and more specifically to address urinary/renal issues, stomach ulcers, diarrhea, bronchial congestion, skin and eye inflammation, cuts and minor wounds and even high cholesterol & diabetes.  This incredible cactus has also been utilized as a thickener for earthen walls/structures, to filter contaminated water, fodder for cattle and wildlife and as a protective hedge.

Growth/Habitat: Like many other cactus species, the Opuntia genus is indigenous to much of North and South America as well as the Caribbean islands. Through human interaction, however, members of the Opuntia genus have spread to many other arid to semi-arid parts of the world. Here in Florida, we have 4 species of Opuntia indigenous to the state, and 3 that are non-native but naturalized. Of these three non-native species are O. ficus-indica & O. cochenillifera.  Opuntia species are sprawling to erect, ranging from 2 to 16 ft in height depending on the species. Cactus have modified flattened photosynthetic stems, called cladodes (pads), that are usually spiked and also have small spiny hair clusters called glochids. They have showy flowers that range from yellow, to orange to red to pink that then form into dark red fruits that are also often spiked. Like other members of the Cactaceae family, Opuntia thrives in hot, desert-like climates.  Well-drained soil and full sun are ideal for this drought-tolerant plant. The easiest way to propagate a prickly pear is by rooting a cladode. Use heavy gloves to snap off a pad that is at least 6 months matured. Allow the pad to layout for a few days and callus over. Place the callused end in a mix of equal parts potting soil and sand. Mist with water and do not water again until established.

Recipes: Peggy Lantz offers guidance on harvesting and consuming prickly pear fruit. Utilize gloves, tongs, and care when harvesting fruit. They should be fully ripe and easy to pop off with a twist. Wash the fruit under a hose with high pressure to remove most of the spines and glochids. This is helpful but there will probably still be some spiney parts on the fruit so continue to handle with care. Slice fruits lengthwise, and put in a five-quart saucepan, add water and simmer 20 mins. Mash with potato masher and strain. Add 2 cups water to 2 cups juice and honey for a delicious cooling beverage.  To harvest the pads, utilize the same technique of gloves and tongs. Cut off tender young pads. Carefully cut out large sections of spines with a knife. Prepare them using one of the many amazing recipes for nopales available! Here is an example of a recipe for tacos de nopales.
Ingredients:

Clean nopales. Heat oil in a wide pot or pan over medium heat for 2 minutes. Add the sliced onion, garlic, pepper, and cleaned nopales. Stir to coat the vegetables in the oil. Cover the pot with a lid, and cook for about 10 minutes. Remove the lid, stir in the salt, and continue to cook until most of the liquid evaporates about 5 minutes. To serve, char the tortillas on a gas burner or in a hot skillet. For each taco, stack 2 tortillas, scoop some warm nopales filling into the center, and top with radish, queso fresco, and lime wedges