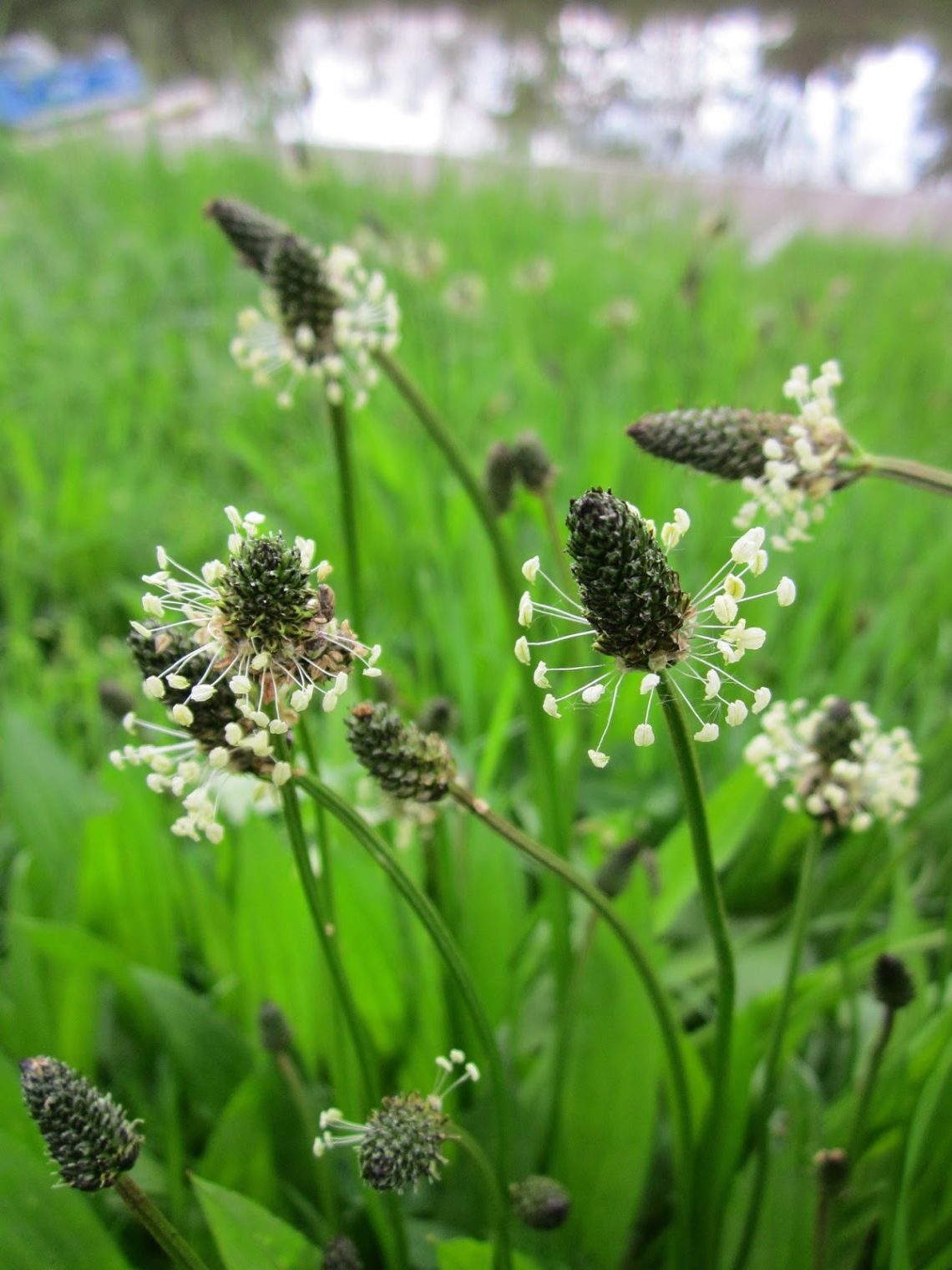 The leaves of Plantago major and Plantago lanceolata, commonly known as plantain, are an essential component of any herbal medicine cabinet and first aid kit. Originating in Europe & Northern and Central Asia,  P. major & P. lanceolata have become naturalized in North America.  Plantain leaves are cooling, demulcent, and mildly astringent; these properties lend to plantain’s usage as an anti-inflammatory, antiseptic, analgesic, vulnerary, decongestant, and drawing agent. Commonly called the “green bandage” a poultice of fresh, mashed Plantago leaves can be used topically to address insect bites, stings, rashes, eczema, poison ivy/oak, and infections. The drawing ability of plantain can assist indirectly pulling out any fussy insect stingers or splinters embedded in the skin. Infusing plantain leaves in oil and making a salve is one way to access the vulnerary, or wound healing, properties. A stand-out first-aid plant, Plantago can also assist in stopping minor bleeding of scrapes and cuts. All of the aforementioned properties that contribute to plantago’s topical uses also lend to the leaf’s internal applications. The cooling, demulcent, and vulnerary properties of plantain have an affinity for the digestive tract and respiratory system. Hot, inflammatory issues of the digestive system such as ulcers and heartburn can benefit from an infusion of the leaves. A respiratory system irritated by a dry cough can be soothed in a similar fashion. The mild astringency of plantain leaves can help expel dampness in the lungs.  The young leaves of P. major can be eaten and are high in Calcium, & Vitamins, A, C and K. P. virginica is our Florida native plantain and is reputed to have similar properties to that of P. major/P. lanceolata, especially topically in the treatment of inflammatory skin irritation, infection and insect bites. The seeds of P. ovata and P. psyllium, also known as psyllium husk, are a commonly used dietary fiber.

Growth/Habitat:  As mentioned, P. lanceolata, P.major are native to Europe and Northern and Central Asia, but are now widely distributed throughout North America. These species occur in Florida but are commonly found in more northern regions. Arriving with European colonization, Plantago major came to be known to indigenous peoples as “white man’s footprint” , due to its thriving in the disturbed soils around European settlements. Almost all plantagos can be found flourishing in disturbed soils along roadsides and forest edges. P. virginica, in particular, thrives in our sandy Florida soils. Most Plantago species in Florida will make an appearance in late winter, putting up flowers and seed heads spring into early summer. These relatively tender plants often die back in the heat of Florida summer.  The leaves of P. major, P. lanceolata, and P. virginica all present themselves in a basal rosette of leaves, spreading close to the ground with inner leaves becoming somewhat erect. P. major has wider, broader leaves, which is why it is sometimes called broadleaf plantain. P. lanceolata has longer, narrow, lance-shaped leaves with more defined ribs (hence the common name ribleaf/ribwort).  P. virginica has more narrow leaves like P. lanceolata, but the leaves tend to be smaller, toothed and quite hairy. See accompanying images for more detail. The inflorescence of plantago flowers is born on long stalks that terminate in a cone or spike of small white flowers. Each of these flowers may produce up to 200 seeds!  P.major and P.lanceolata are technically perennials but tend to behave more like annuals in Central Florida. P.virginica is an annual.

Strauss, Paul. The Big Herbs the Use and Abuse, Natural History and Identification of Major Tree and Shrub Species in the MidWest and Eastern U.S., with Stories and Insights of a Life Married to Farm and Forest. XOXOX Press, 2014.