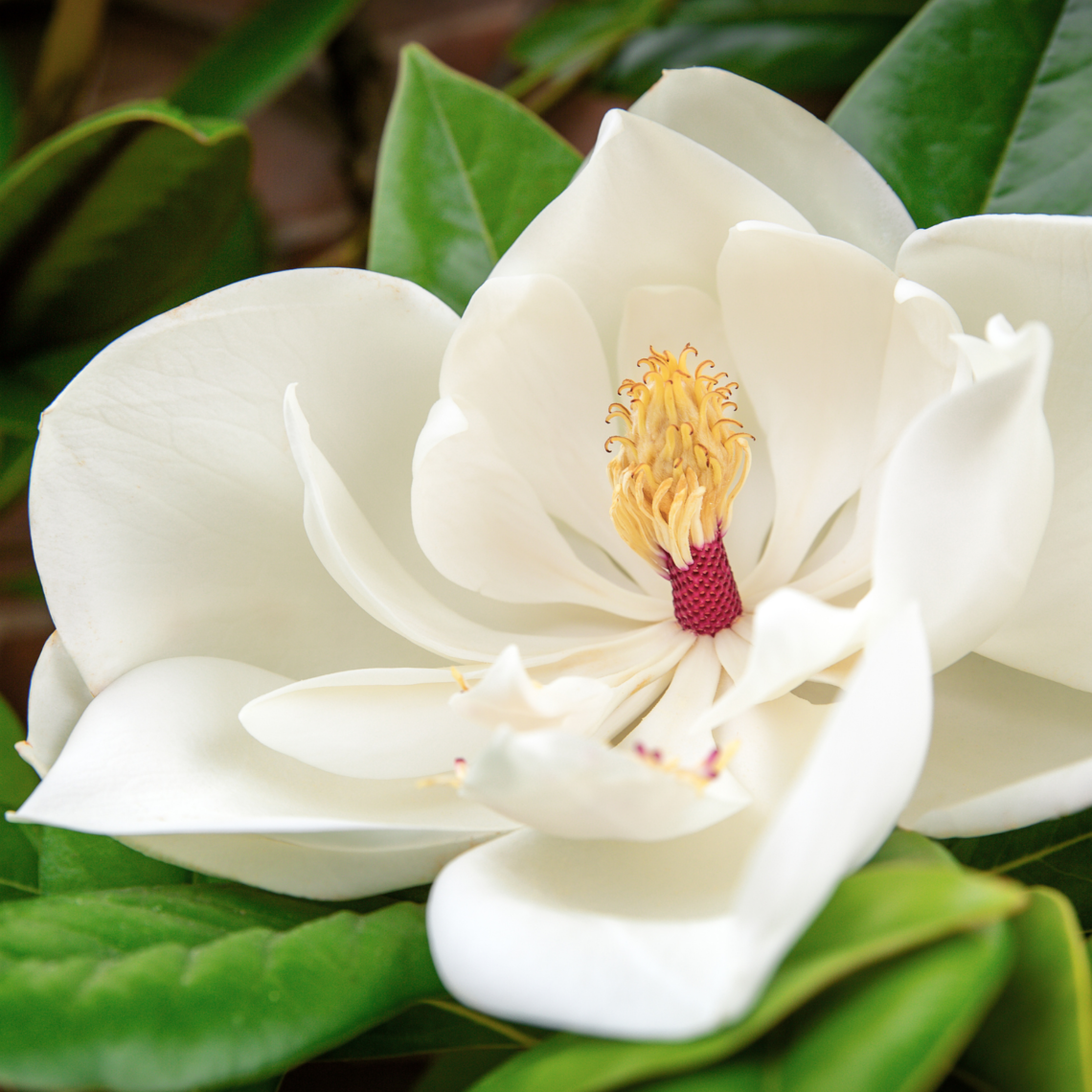 Habitat
Native to China’s mountains and valleys and grows wild in mountainous regions. Now used in
many parts of the world as a garden tree or for landscaping. Magnolias are spreading,
evergreen, or deciduous trees or shrubs. They have large fragrant flowers that can be
bowl-shaped or star-shaped. Cutting propagation is preferred for most magnolias. It is common
in moist, acid soils close to wet places such as ponds, streams, and cutover lands and it prefers
full sun-light shade. There are over 200 species of magnolia and though they are most well
known for white flowers, the blooms are also available in other colors including mauve, pink,
lavender, yellow, and purple.

History/Tradition
The tree’s genus is named in commemoration of Pierre Magnol, a professor of medicine and
botany in the early 18th century. Magnolia is one of the oldest trees in existence. Fossils have
been found that date back 20 million years to a time before there were bees. Beetles are their
main pollinator. This accounts for the differences in shape and texture compared to other
flowers. Currently there are more than 200 Chinese patent drugs that are based on magnolia.
Magnolia is a symbol of perseverance, endurance and long life because of the tough thick
flowers and the long life of the trees which can survive over a hundred years.

In “Plant Lore, Legends, and Lyrics” by Richard Folkard, the author says that Magnolia is a plant
of the Devil. He says it belongs to a group of plants that are noxious, poisonous, and deadly
with “baneful emanations” from which they have gained a bad name. “When wafted to a
distance upon the air, the scent is delicious, but when inhaled in the immediate neighborhood
of a group of Magnolias in flower, it becomes overpowering.” It is stated that the perfume of the
flower is so powerful, that a single blossom placed in a bedroom suffices to cause death in one
night”

In the southern state of Georgia, it was traditional to plant a magnolia in each flowerbed
because it was believed that the plant brought much luck and economic stability. According to a
legend, it was the first plant grown outside that became the largest and most majestic in all of
Europe, living for over 100 years.
According to a Japanese legend, it is advisable not to sleep or stay too long under a blooming
magnolia tree, since the intense perfume of its flowers, could stun or even kill.
There is a Chinese legend that says the Hunhuzes invaded a village, killed all the males, held
100 of the women captive and killed every morning. On the hundredth morning, the last
woman prayed to the earth to preserve their gender. The next day every slain body was gone
and replaced by a large sprawling magnolia tree with exactly 100 flowers. In their anger, the
Hunhuzes cut off branches with their swords, but to their dismay, every branch that hit the
ground turned into another tree with 100 flowers.

In ancient times of China, only the emperor was allowed to observe how the magnolia
flourished, but if he wanted to, he could give this plant to his faithful servant. The first magnolia
tree is said to have grown on the tomb of Confucius.
According to Japanese folklore, there was a little girl named Keiko. She was very poor and
made paper flowers to sell which didn’t give her enough money for pretty clothes. One night a
parrot flew into her window. Because she accepted the bird and didn’t drive it away, the parrot
told her that the secret to reviving her flowers is to use a drop of her own blood. The parrot
warned her that it must not be the last drop of blood. With her new knowledge, the girl was able
to make beautiful flowers and sold enough to get out of poverty. She did really well financially
and fell in love. Her husband was greedy and forced her to work so hard that she became ill. On
her deathbed, she gave her last drop of blood to revive a flower and that flower turned into a
beautiful crimson magnolia. The bark can be used for furniture, paneling, veneer, pulp, tool
handles, cabinetwork, and crates.

Benefits
Relieves cramping pains and flatulence, Taken for abdominal distension, loss of appetite,
vomiting and diarrhea. Mildly antimicrobial and possibly effective against amebic dysentery.
Magnolia liliiflora is used to clear mucus and treat respiratory infection. Used successfully in oral
health. Protects against the effects of oxidative stress due to its polyphenols like honokiol.
Honokiol has been found to reduce inflammation in the brain and spinal cord so hopefully it can
be used in therapy for diseases like Alzheimer’s. Honokiol also helps regulate cell signaling
pathways which is great for cancer treatment and prevention. Also, honokiol mimics the function
of estrogen in the body. Traditionally used to treat asthma, anxiety, depression, stomach
disorders, and inflammation. The flowers are associated with the lung and stomach meridians in
TCM

Cautions
Not to be used during pregnancy or lactation. It could cause contractions in the uterus. Magnolia
is known to slow down the central nervous system so it is not advised to use it less than two
weeks before procedures so that it doesn’t combine with anesthesia or slow down clotting of
blood. According to TCM, Magnolia should not be used by those who are Yin Deficient with
signs of Heat. Overdose may cause dizziness and/or red eyes. If you have a medical condition
or take pharmaceutical drugs please consult with your doctor before using this.

Culinary use
The flowers may be eaten and taste fragrant and spicy. The flower petals may be pickled,
fermented, infused in vinegar, honey, vodka or olive oil.
In parts of England, the petals of M. grandiflora are pickled and used as a spicy condiment. In
some Asian cuisines, the buds are pickled and used to flavor rice and scent tea. In Japan, the
young leaves and flower buds of Magnolia hypoleuca are broiled and eaten as a vegetable.
Older leaves are made into a powder and used as seasoning; dried, whole leaves are placed on
a charcoal brazier and filled with miso, leeks, daikon, and shiitake, and broiled. There is a type
of miso that is seasoned with magnolia, hoba miso.

Magick
Element : Earth
Planet: Jupiter/ Venus
Magic : Placing magnolia flowers near the nuptial bed ensures fidelity, and when added to the
bath, they attract honor and recognition. The trees promote financial increase. After the flower
petals have dried and fallen away, the resulting seed cone makes a wonderful aspergillosis for
ceremonial waters. Hanging magnolia seed pods on the doors of a home attracts luck. Use
magnolia in spells to strengthen passion, loyalty, luck, attract love, protect sentimental unions,
and promote emotional balance.