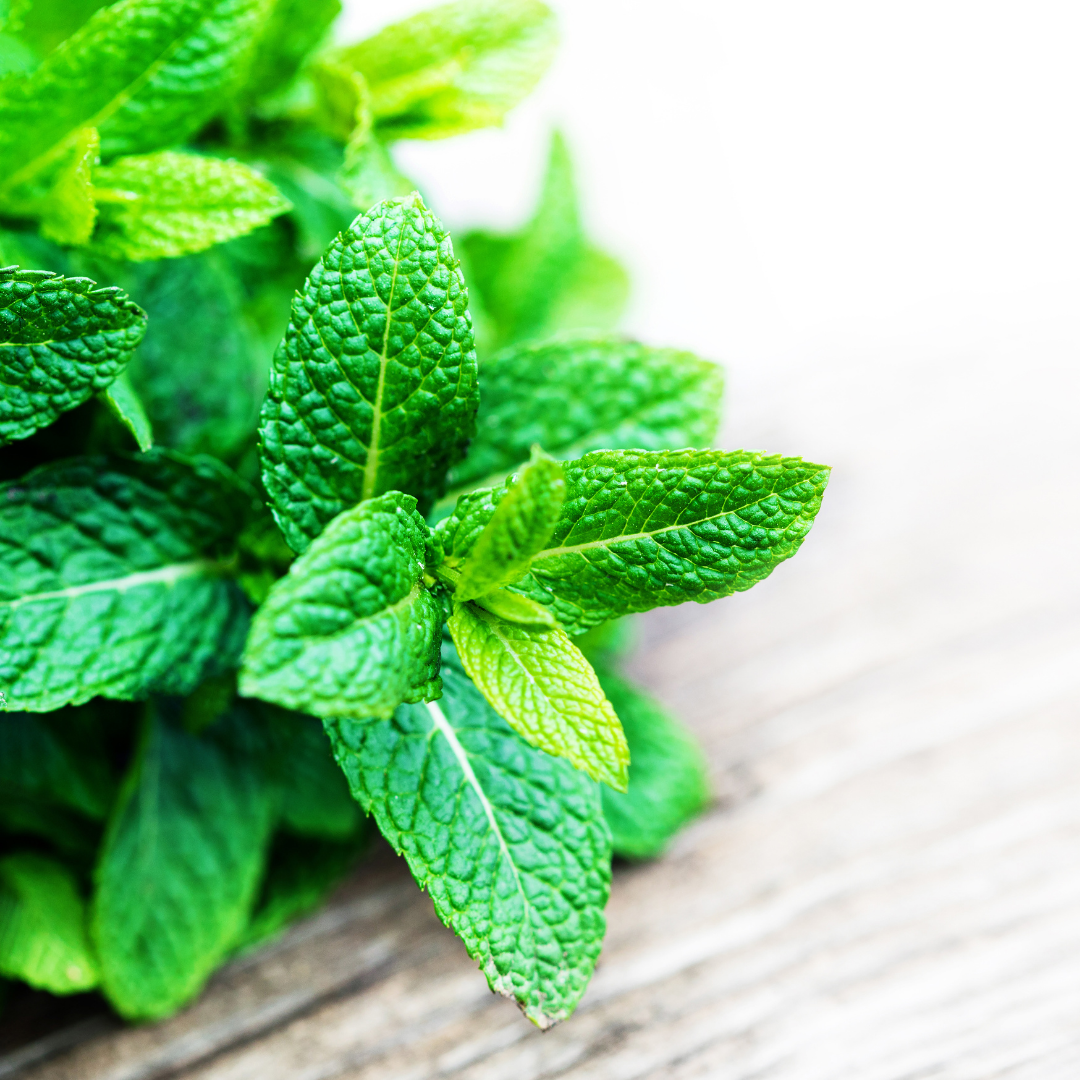 Habitat: Peppermint is a hybrid plant, a cross between watermint (Mentha aquatica) and spearmint (Mentha spicata). Native to southern Europe, it is a perennial herb that has been naturalized worldwide. Peppermint grows wild in moist soils in the warm regions of Europe, Asia, and America.

Growing peppermint requires full to partial sun with moderate to high amounts of water. It can be a little invasive and spreads quickly. Mint seeds are small and difficult to work with, so growing from cuttings is preferred. The peppermint plant grows to about 2-3 feet in height. It produces very small purple or white flowers that bloom from July through August. The leaves are dark green and fragrant.

Parts Used: Fresh and dried aerial parts of the peppermint plant are used as well as the distilled volatile oil (essential oil).

Dried peppermint leaves were found in Egyptian pyramids dating back from about 1000 BC. The ancient Egyptians used peppermint as a ritual perfume. It was an ingredient of the sacred incense, kyphi. According to tradition, burning a handful of mint leaves removes diseases and promotes healing.

Peppermint has been highly valued by the Ancient Greeks and Romans. It was often used to scent bath water and bedding. The Romans crowned themselves with peppermint wreaths during great feasts to take advantage of the detoxifying effects.

According to Greek mythology the genus, mentha, Takes its name from the nymph, Minthe Who had an affair with the god of the underworld, Hades. His wife Persephone was jealous of Minthe and turned her into a nondescript plant. Hades turned the plant into a valuable, lovely- scented, useful herb that would be appreciated and valued until the end of time.

In the Islamic tradition, mint is considered a pledge of love while in Japan, it is used as an aphrodisiac. In India, researchers at the Malaria Research Centre in Delhi have found that the oil repels adult mosquitoes and can kill the larvae. Which can have positive effects on diseases such as Dengue Fever and Malaria.

In Germany, peppermint leaf tea has been licensed for use during indigestion or dyspepsia

Energetics: The flavor of peppermint is pungent and sweet. It is a dry, cooling herb with a warming secondary effect.

Uses: Digestive System: Peppermint is an ally for assisting the Digestive System when there are symptoms like gas, bloating, colic, irritable bowels, and nausea (especially when there is a headache involved) A cup of mint tea after a meal is a traditional digestive aid. It provides a relaxing, carminative effect on the digestive system while promoting bile and digestive juice flow.

Peppermint is well known for promoting fresh breath and is used in many toothpastes. Not only does the strong scent mask the halitosis, but the antibacterial constituents work to kill the germs that cause bad breath.

For the respiratory system, the menthol of peppermint and other mints is used as a chest rub and smelling herb to help clear the lungs by loosening phlegm. It also shrinks swollen membranes in the sinuses, acting as a decongestant. When a spasmodic cough is present, peppermint can be used for its antispasmodic actions.

Peppermint is also useful for the skin and hair with its soothing anti-inflammatory properties. A refreshing mint hydrosol for the face and skin is not only cooling but also helps soothe insect bites. As a facial spray or made into a toner, peppermint cam calm hot, red skin conditions with its anti-inflammatory actions and tightens pores. It also has antiseptic actions to help keep the skin clear of acne.

As a treatment for dandruff, peppermint rinses help soothe an itching dry scalp. Peppermint is often an ingredient in salves for other forms of eczema for the same anti-inflammatory and soothing effects.

Cautions: Peppermint often aggravates reflux (though spearmint may not), and the essential oil should always be diluted. Peppermint should be used cautiously during pregnancy and your doctor should be consulted if using pharmaceuticals such as medicines that treat heartburn.

Culinary use: Peppermint supplies the cool refreshing familiar flavor we love in peppermint candies. Not only does peppermint make a delicious infusion, it’s also well known as an ingredient in some Mojitos, Mint Sauces and mint chutney. A few other delicious ways to use peppermint include in a lemon/lime aid, in pesto, mint chocolate chip ice cream, a peppermint simple syrup for hot cocoa and coffee drinks, and it makes a great mint gelatin.

Other uses: The smell of peppermint is a snake and mouse repellant. Peppermint hydrosol or flower water is most famous for its digestive, anti-inflammatory and mind-stimulating properties. Spritz it on your face when tired, or during hot weather and you will feel an immediate refreshing effect.

This materia medica was written by Jessica Grandey