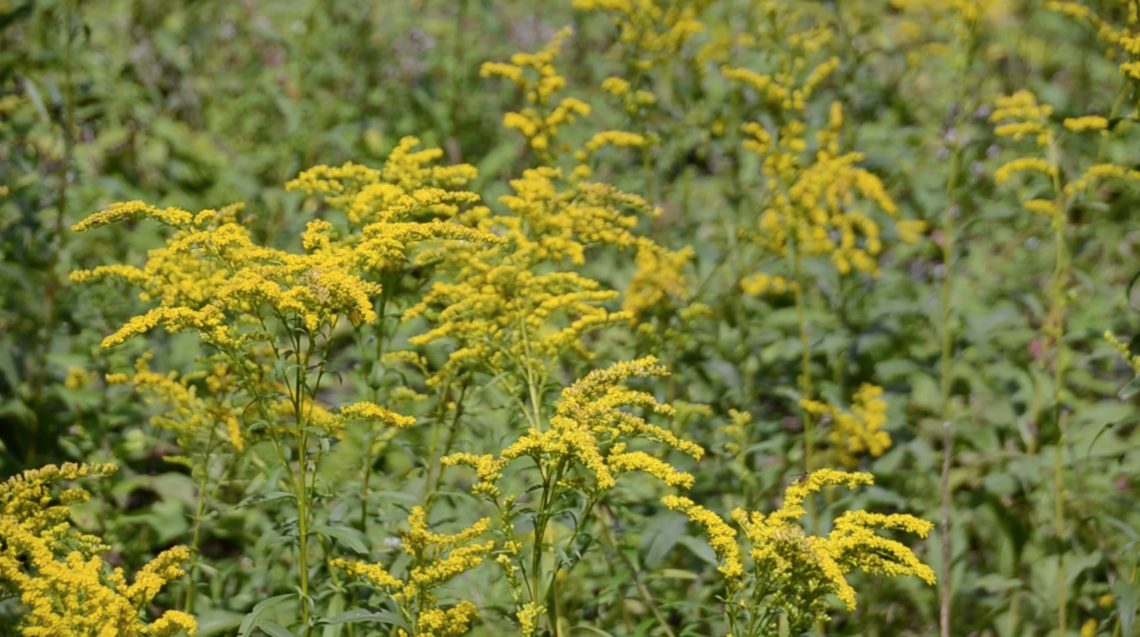 Habitat: Goldenrod is a perennial native to North America that grows 2-5 feet tall with slightly hairy stems and pointed leaves arranged alternate along the stem. At the top of the stem is a bright wand or plume of yellow flowers (or, in the exception of a few species, white) that appear in different arrangements based on the species. These flowers bloom in late fall, providing an important source of nectar and pollen for all sorts of insects. In fact, goldenrod is an incredibly important plant to support pollinators. It is said to support over 300 types of bees alone, and the Goldenrod Spider is specifically named after the webs it creates in this plant, knowing it will catch lots of flies, wasps, and other insects. While is supports these smaller insects, it also attracts birds who feast on them, and in the winter months, mice and voles who nest within its stalks, further attracting other predator species like hawks, owls, foxes, and coyotes.

A Deep Tradition: Goldenrod has been and continues to be used by the First Peoples of North America for generations. Much of what we know about the medicinal actions of this plant come from their generous teachings. This beautiful article from Robin Wall Kimmerer, an excerpt from her book Braiding Sweetgrass, shares a bit of the magic and medicine these golden flowers embue.

Energetics: Goldenrod is generally considered astringent and aromatic, but the subtleties of these energetics can vary. Some species are more warming and others are more cooling. Some are markedly astringent and employed to dry tissue, while others are strongly pungent and favored for their fragrance.

Benefits: The leaves and flowers of goldenrod are typically employed, though there is a historical tradition of boiling the root in tea to address fevers in the southeastern United States. Leaves and flowers confer a wide array of benefits and support many systems of the body:

Urinary System: Known for its antiseptic and diuretic properties, goldenrod is often included in formulas for urinary tract infections. There is a wealth of clinical evidence supporting its benefit in treating kidney inflammation (nephritis) as well as kidney stones. It is included in the Commission E Monograph for prevention and treatment of a variety of kidney and bladder ailments.

Respiratory System: As an astringent, goldenrod can alleviate excess mucus during upper respiratory infections. It is helpful as an expectorant and decongestant. It can soothe sore throats, especially during period of extending coughing spells. Goldenrod is often confused with its cousin, Ragweed (Ambrosia artemesifolium) and maligned for causing allergic rhinitis. This is not likely the culprit, as the pollen of goldenrod is heavy and sticks to the stamens, requiring the help of pollinators to be carried to other plants, whereas ragweed pollen is very light and flies easily on the wind. In fact, goldenrod is included in many formulas to address the symptoms of allergies, including sneezing, runny and itchy eyes, and sore throats. See more about Ragweed vs. Goldenrod from the Herbal Academy.

Muscles and joints: Goldenrod is favored infused in oil and used as an oil or added to a salve to address inflammation and pain topically. Learn more about infusing goldenrod into oil in this recipe from Robin Rose Bennett.

Colds and flus: Goldenrod is a great ally to address mild fevers and has a long history of use in the treatment of colds and flus.

Nervine: Goldenrod is a gentle nervine and is helfpul in alleviating seasonal depression. Those signature yellow flowers bring joy while blooming and in a cup of tea long after summer’s blossoms have faded.

Wound Healing: “The generic name Solidago comes from solidare, for the plant is known as a vulnerary, or one that ‘makes whole’.” -Grieve, The Modern Herbal

Goldenrod leaves and flowers can be added to a salve or used as a poultice or wound wash to help speed up healing. They are particularly helpful to address insect stings and bug bites.

Try goldenrod is an infused tea, an infused oil, an infused honey, a tincture, a vinegar, a poultice, or dry some to enjoy as a winter bouquet.