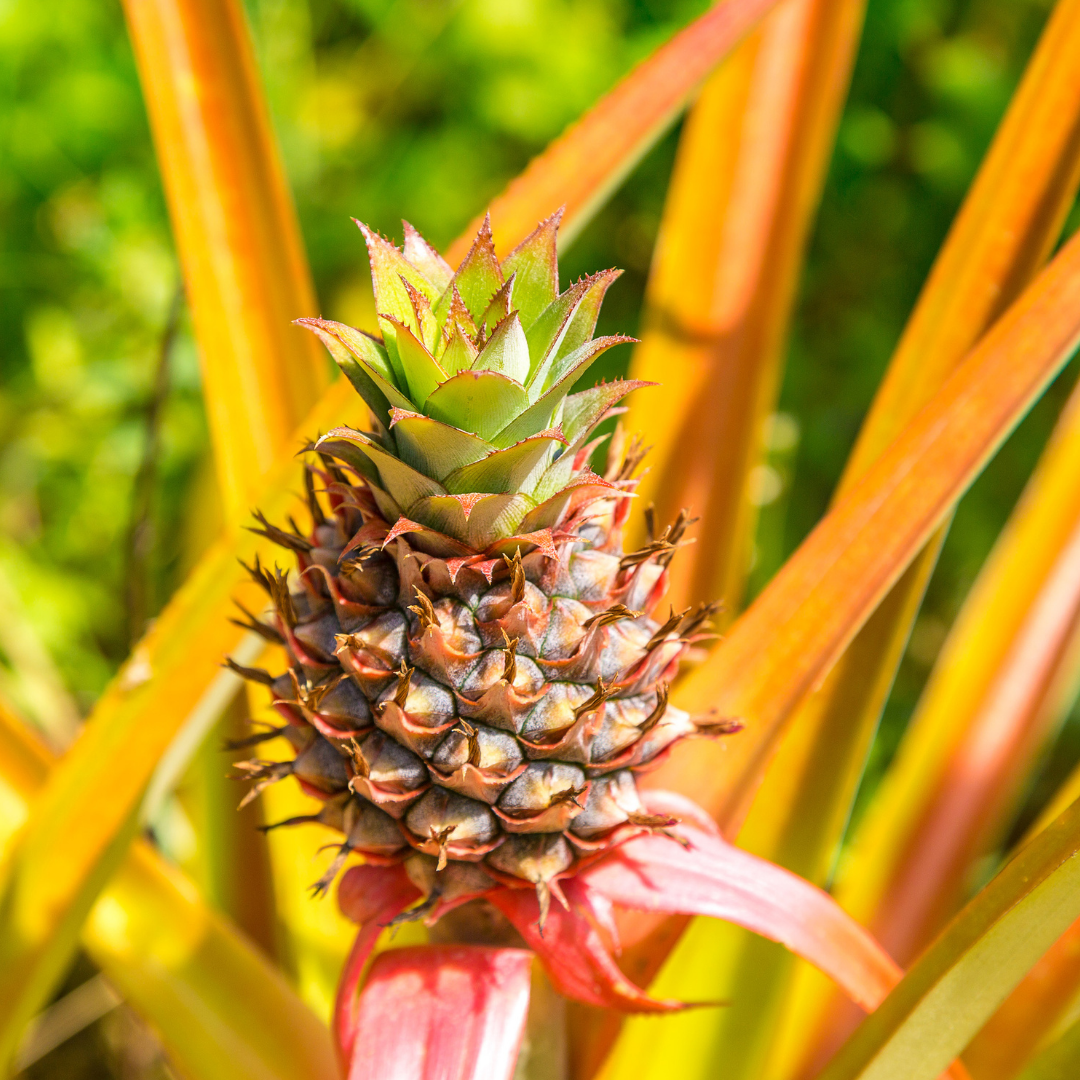 Habitat
Native to Central and South America and naturalized to Hawaii, South Africa, China, India, Kenya, Thailand, Malaysia, and The Philippines. From South America, pineapple cultivation made its way through the Caribbean, Central America, and Mexico where it was cultivated by the Mayas and the Aztecs. By the late 1400s, cropped pineapple was widely distributed and a stable component of the diet of Indigenous Americans. Pineapple grows best in tropical to subtropical climates and at lower elevations. Growing at higher elevations causes a more acidic flavor to the fruit. Pineapple is an herbaceous perennial herb that loves full sun but does fine in dappled shade. It is happy in pots and tubs as well as in greenhouses. It grows to around three feet tall.

“Pineapples are actually a composite of many flowers whose individual fruitlets fuse together around a central core.  Each fruitlet can be identified by the rough spiny marking on the pineapple’s surface.” -National Produce.com

“The primary pollinator of the pineapple plant is the hummingbird. Hard seeds can be present in the fruit if the flowers are pollinated; however, if they are not, few seeds will be present” (Morton 1987).

When a pineapple is ripe it should give a dulled sound when thumped. If it sounds hollow it is not ripe. A ripened pineapple can easily lose its spikes.

Pineapple is the third most important tropical fruit in world production.

History/Tradition
Pineapples are symbols of hospitality and warmth. They express the sentiment of “welcome.” This use of pineapple to make a guest feel well-received is from the rarity of pineapples in America in the 18th century. They were quite expensive, so only the affluent could afford them. Wealthy hosts would often serve pineapples to guests.

There’s a story that says Columbus packed the hold of his ship with numerous pineapples after a voyage from the Americas to Europe. Because pineapples can only survive about a month when picked at peak freshness and the trip was longer than that, only one survived the trip. The surviving pineapple was presented to King Ferdinand, since he had sponsored the voyage. When they found the court adored the fruit, this kicked off pineapple production in the tropics.

Since the fresh fruit was so perishable, it became a symbol of luxury, nobility, and wealth.

King Charles II of England even posed for an official portrait in an act of receiving a pineapple as a gift.

The pineapple has been used traditionally to decorate door knockers, quilts, and other objects to express a welcoming environment. Some Europeans in Spain and England traditionally placed pineapples outside of their homes to welcome guests with sweet smells and to represent hospitality and friendship. Pineapples were also carved into buildings, mansions and government edifices to convey this feeling.

“Apple” was later added to Pineapple’s name by Europeans. Natives to the West Indies originally called it na-na, which is where its botanical name comes from (Ananas Comosus).

There is a folktale in the Filipino culture that explains that pineapples got their eyes after a spoiled little girl wasn’t putting much effort into helping her mother or helping to look for things. The story goes that the mother, not knowing her own powers, wished that her daughter had a thousand eyes. The next day her daughter was gone but a beautiful many-eyed pineapple was growing in her yard.

Cautions
Not to be consumed by those with peptic ulcers or skin discharges. Pineapple could cause allergic reactions. Do not use unripe pineapple without the supervision of your health care professional. Use the leaves with caution due to high amounts of bromelain. Do not ingest the leaves.

In Central and South America the juice was consumed as a diuretic, gargled  both for sore throats and to prevent seasickness. The juice has also been used to expedite labor. In Panama the leaf juice is used as a purgative, emmenagogue and vermifuge. Powdered pineapple was used to treat edema In Africa the rind was topically applied to fractures and hemorrhoids to reduce pain and inflammation. In Panama, the leaf juice was used to bring on menstruation, remove parasites, and for intestinal cleansing.

In Traditional Chinese Medicine pineapple is a yin tonic. It clears heat and damp, regulates water and disperses wind. Specifically, it is good for wind—damp. Ancient Chinese medical texts suggest it enters the stomach, spleen, and bladder.

Some conditions they are used in the treatment of include: burns, sunstroke, lack of strength in hands and feet, indigestion, vomiting, abdominal distention,  low blood pressure, some types of fever with accompanying thirst, difficulty urinating, black eyes, anorexia, diarrhea, and edema. The leaves encourage menstrual periods and they help ease menstrual pains.

For the best medicinal results, pineapples should be eaten alone.

The bromelain enzyme derived from both the stem and flesh of the pineapple has therapeutic properties. As an exfoliant, it soothes ailments associated with uneven skin texture and irregularities caused by inflammation. Bromelain also lightens scars, builds collagen and can heal wounds. Bromelain has been used in prevention of malignant cell growth, platelet aggregation and thrombosis formation. Bromelain is best known as a digestive enzyme which increases the permeability of nutrients and of pharmaceuticals.

Delicious fruit, juice, wine, syrup, sauce, preserves. The fruit is versatile with a bright tropical flavor and is used in fruit salads and in desserts like pies, cakes and puddings. It’s also found in curries and on pizza. Pineapple has been used as a meat tenderizer as well.

Pineapple juice has been used for cleaning machete and knife blades and, with sand, it is used for scrubbing boat decks.

Pineapple crowns are sometimes fed to horses and processing waste from canning and Bromelain extraction has been dehydrated and fed to cattle, pigs and chickens for the fiber.

The skin can also be dried and used in potpourri or as an ingredient in body scrubs.

You can make vinegar with pineapple skins for cleaning and as a clothing softener. Pineapple skins are even used to make paper in some parts of the world.

Pineapples carry the energies of strength and power. They are associated with wealth, good fortune and good luck. Courage and stamina can be found from charms made with pineapple. Dried pineapple makes for excellent sachets and incense that can draw wealth to the home and encourage financial gain. The leaves

They can increase confidence, personal magical energy as well as strengthen psychic experience and intuition, all to increase the chance of success in achieving a goal.

Among its magical properties are also youthfulness, immortality and regeneration.

Use pineapple to welcome a friend back from travel. It can also be served at celebrations to encourage happiness among guests. Pineapples baked into desserts and then shared with a loved one can encourage devotion. Pineapple treats shared with friends can strengthen the bonds of companionship. Pineapple leaves can be used to ward against jealousy, greed and envy. The leaves draw prosperity, growth and abundance to a home. The pineapple crown can be placed into the earth to draw these energies to the home. With the right conditions, within two to three years, there will spout a new pineapple, expressing the growth and renewal energies. Also, pineapple’s crown makes an excellent and magical house plant. This plant, when gifted to friends or loved ones, can help them heal from past wounds and grievances. It can also be gifted as a good luck blessing.

When placed in a sachet, use leather to help protect against pineapple leaves’ caustic nature. Pineapple Skin can be used in protection magic. It is connected to energies of intimacy and emotion, creativity and sensuality.